Another change of late is Super Milo! We got Milo a super hero cape and he loves to run around being "super". For some reason he likes to put a pair of red sock on his hands and say those are his super socks and well as putting on his cape. He is too funny!

Super Milo running around the backyard being super! 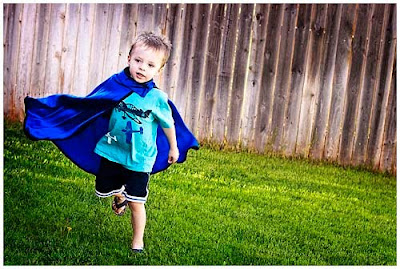 Milo has done so much growing and changing since I posted last. In that time we successfully moved him to his new room with his new bed (pics to follow soon!). That transition wasn't all together smooth but wasn't all that bad either. He took to it much better that I thought he would. I asked him today if he missed his crib and he indefatigably said "Yes!". He still views the nursery as his room even though he hasn't slept in there in a few weeks. When he said he wanted to get back in his crib today I told him that was were his baby brother was going to sleep. He got a bit upset and said that baby can sleep in his big boy bed and he would take the crib. I'm hoping that once we repaint and rearrange the nursery he will feel less like it's still his room.

Since moving to his big boy bed he has started to sleep less. His naps are shorter and he is waking MUCH earlier in the morning than he did in the crib. I think it's because he is fascinated by the freedom he now has. If he's awake then he can get up and play but while he was in his crib if he woke at the crack of dawn then he didn't have anything to do and just laid back down and went to sleep again. This has been quite an unwelcome change for me! I'm not used to having to get up so early with him. I really hope this is a phase that doesn't last very long!
Posted by Abby at 4:30 PM 1 comment: