I found a bunch of hats and stuff that relate to different professions in the dollar bin at Target a few weeks ago. I got pretty much every one they had and brought them home to Milo who has been obsessed with them ever since. He LOVES to run around pretending to be whatever hat he is wearing at the moment. The funny thing is he pretty much knows, with out having to be told, which hat goes with which profession and how to act and what to say when wearing that hat. I have no idea how he knows that.
Milo in his police hat. He also has a little badge, whistle and night stick that go with it. We've had to put limits on the use of the night stick! 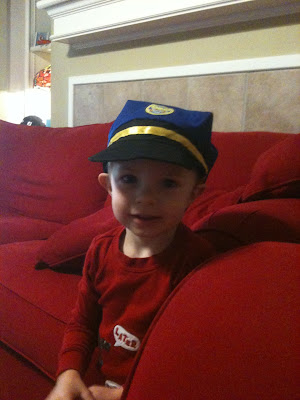 There will definitely be more pics to come!
Posted by Abby at 9:26 AM

That is too cute! Milo lerning about all kinds of community workers! When is baby brother coming out?!!!

So cute. Kids love to pretend!