Though Milo is much more agile now than he used to be he is still very much in the "clumsy toddler" stage. He gets bumps and bruises so often that I can't even keep track sometimes. today for instance he hurt himself 4 times before 11:00am. He was crawling under the desk and tried to stand up and bumped his head, then he was trying to climb on his big beach ball and fell and bonked his head on the coffee table and twice he was opening and closing a drawer and closed his fingers in it. Each time he started wailing and dripping snot and crawled up in my lap to snuggle down until he felt better and each time he covered me in tears and snot! I swear I change my clothes more in a day than I change his and he is the one still eating with his fingers and having occasional diaper explosion. Being able to give him the comfort he needs is all worth it but, man, I get tired to so much laundry.
Milo having a toddler melt down.
He screams and get really snotty and teary and then calms down, forgives me for not letting him have whatever he wanted or making him do whatever it was he didn't want to do (i.e. eat something or get buckled into his car seat) and and climbs up in my lap to snuggle. 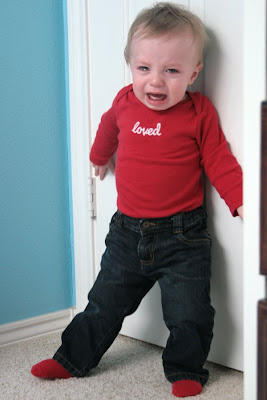 How can someone throwing a fit still manage to look so cute?