I think Milo has finally decided that he has a favorite blanket. He has always been a blanket baby but I kept changing out the blankets he slept with so that he wouldn't get attached to one inparticular so it wouldn't be a big deal if we went some where and forgot that blanket. It took 16 months but despite my best efforts he seems to have formed an attachment to one of his blankets. I first noticed his growing love when I went to put it in the wash and he threw a fit. He didn't care about the other two blankets that went in the wash, just that one. Since then when I get him out of the crib in the morning he grabs the blanket and carries it around all day. He even insisted that we take it with us when we were leaving the house.

I am really kind of flabbergasted by this. Other than a preference for Tux (his stuffed penguin) over his other stuffed animals he has never really shown much attachment to things. He has certainly never carried Tux around like he does this blanket nor insisted that he ride in the car with us. I thought that if he was going to have formed a bond like this with a blanket or stuffed animal or something he would have done it by now.

Super Milo using his blanket as a cape 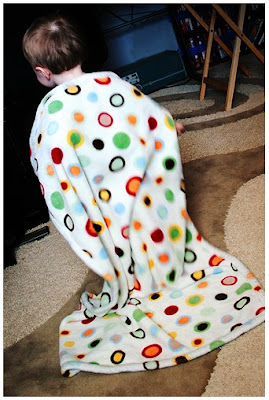 "oh Blanket I love you!" 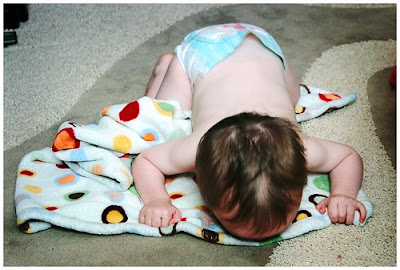 And what a spectacular blanket it is!

I LOVE the blanket cape!! No wonder he loves it so much....that's a really cool blanket!!