I know it's a bit late but to post but this it was I end up doing for Milo's 16 month/Valentines Day portrait! I thought it was a bit different from the the usual stuff that I did with him. 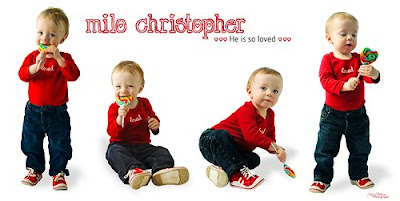 It took two different session and several melt downs to get these shots. At first he didn't want any thing to do with that sucker. After trying and trying I finally gave up, packed up my stuff, stripped him down to his diaper and a decided to eat the sucker myself and that is when he decided that he would give it a try (of course,becuase anything mama has has to be something he needs). Once he tried it he liked it like I knew he would. After all he does have my sweet tooth. Fortunately there were two sucker in the pack that I bought and a couple of day s later we tried it again and it went MUCH smoother. In fact I could get him to let the darn thing go when the shoot was over! His room was a sticky mess but I think the picture was worth it!

This is SO cute!

BEAUTIFUL!! You are such a lovely photograpehr!!