So, Chris finally said that he liked the blue and brown fabrics best so we had decided to go with those for the baby’s room. To make a long story short they didn’t have the main blue fabric that all of the other design was based around, but I was told that they could get it again later in the week, but when I went to ask about it after not being called when it should come in I found out that the warehouse was out of it and they couldn’t tell me when or if it would come in. I was completely disgusted because I was told that I could defiantly get it and now that were saying something different so I found some other blue and brown pre-made bedding and that is what we will finally be going with. 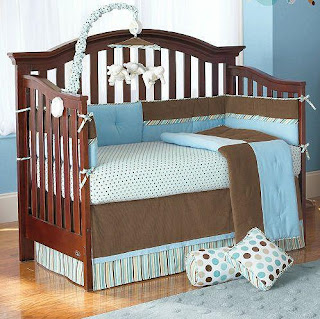 This is so cute! Is it from JC Penney? I saw something similar on the Penney's website. Beautiful!