I wasn’t allowed to believe in Santa when I was a kid so in the interest of giving Milo experiences I never had we took him to see Santa at the mall and WOW, was that an experience. When we first got there Santa was gone so we had to wait in a big line for about 20 min until Santa decided to show up Which wouldn’t have been so bad expect Chris was in a bad mood and the most annoying couple in the world was standing behind us. They both talked so loud my ears are still ringing, they kept invading our personal space and the woman kept hissing and clicking at Milo. I am so glad he didn’t smile at her because it would have just encouraged her (not that she needed a lot of encouragement.) Their kid also kept bumping into me so I moved to the other side of Chris to get away from him and he proceeded to move there too and keep bumping into me. So we are inching along the line and I’m trying to ignore them and Chris is getting more and more taciturn and this other kid from further back in the line comes up to the side of the stroller and tries to take one of Milo’s toys off of the car seat. Chris pushed the stroller forward enough to discourage the kid and he goes back to where he came from. As we are getting to the front of the line I got Milo out of his car seat and the lady behind us gets right up over my shoulder and starts to hiss at him some more. I mean she is seriously an inch from my ear. I am moved around putting my back between her and Milo because I was afraid she was going to touch him and it’s finally our turn to put Milo on Santa’s lap. We can’t get him to look at the camera but other than that he does ok. After all of that we end up paying $20 for a terrible quality picture of Milo not looking at the camera and Santa looking like he wants to kill somebody. What an experience! 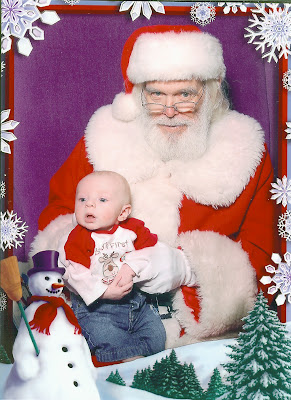 Oh I think Milo looks cute and at least he's with Santa!

Sorry you had such a terrible time.