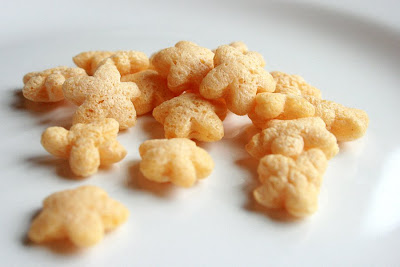 I have been trying to get Milo to eat finger foods for the last month but every time I tried he would make the most awful face and gag so I decided to give it a rest for a little while and try again later. Today during his lunch I decided to try it again and lo and behold, he got then down with out major drama. I broke the Gerber puffs in half and let him gum on those then chased it down with a bite of his cereal mixture. He didn't actually get one into his own mouth but it wasn't for lack of trying. He would grab one in his fist and then try to shove the whole fist in his mouth. He hasn't quite gotten the pincher grasp down yet so that makes it difficult to feed himself right now. At this point I am just trying to get him used to the feel of more solid foods so hopefully when he has masted the pincher grasp self-feeding will go smoother.