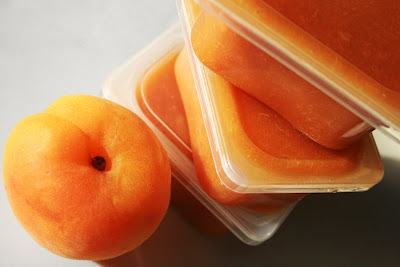 We went shopping yestarday and they had some apricots that smelled heavenly so I decided to make them for Milo. All I did was dunk them in boiling water for a minute or two and then straight into ice water to removed the skin and then pureed the meat. It was pretty easy. After I got done I put them into some Gerber baby food containers that I had washed and saved for just such a purpose. As it turned out the apricots were a little sour so Milo didn't like them. All I could think to do was add sugar to sweeten them up a bit. After I did that he ate them a lot better. I know he cant have honey yet but I wonder if there is something else I can sweeten tings with?

Agave juice/nectar. I'll email you about it. I got busy doing stuff earlier and trying to get stuff ready to go for this next week in FW that I never got back to the comp earlier. Anyway...emailing you anyway so I'll stick that info in with it. It's great stuff!!!!! And safe for babies, organic and healthier all the way around. He'll love it....so will you! LOL! All of my crew does. I sweeten some of Gavin's food with it and all of our teas, some oatmeal and stuff. You can look it up on www.essentiallivingfoods.com. They have a whole article in there about what it is so you can read up on it. We get the Premium Light Syrup. Our co-op here goes in and all orders it together.

He might do fine without any sweeteners because his tastebuds don't know any better. We learn to like the extra sweetness that sugar adds, same with salt. It's great that you are making his food - cheaper, too. :D