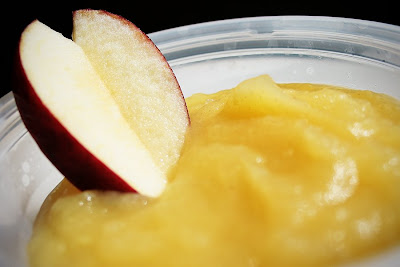 I made my first homemade applesauce for Milo yesterday and boy was it good. Not only had I never made applesauce but I had never tasted warm homemade applesauce either. It smelled heavenly and tasted even better. I gave Milo his portion and ate the rest. It was so simple too, all I did was peal, core, and chop two Breaburn apples. Then boil the pieces until they were soft, drained off the liquid (which was also very tasty), added a little cinnamon and purred in the blender. Cooking is so new to me that I am constantly surprised at how easy all of this stuff really is. My next project is making sorbet and ice cream (not for Milo, for me!).

Sounds so good, I'll have to give it a try. I love your pictures, they are great.