Bailey, our cocker spaniel, LOVES his tennis ball. He absolutely lives to chase the thing. The other day he kept bringing the ball to me and when I wouldn't throw it he would take it to Chris and when he wouldn't throw it he would bring it back to me. This went on for a little while then we noticed he wasn't doing this anymore then we looked up and he had taken it and put it on the floor next to Milo trying to get him to throw it. I guess he has finally figured out that Milo is indeed a little human being rather than just a bald dog! 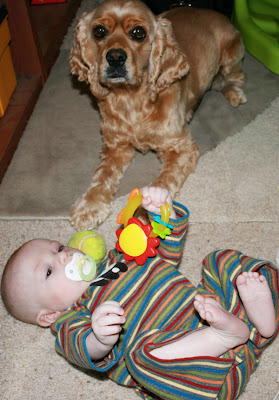 Oh that is HILARIOUS!! Bailey is sooo darn cute!! And I love his outfit! Where do you get all of these cute clothes?