The Scoop on Poop

In a effort to get Milo the calories he was so obviously needing for this growth spurt I was feeding him frequently and we would occasionally give him a bottle of formula. I had also gone and gotten some rice cereal just in case we needed it. One night after the needing to feed so often had gone on for more than a week we were sitting having dinner with Milo in the center of the table sitting in his bumpo. Chris speared a piece if his chicken cordon blue (yes I made it from scratch, I rule!) and playfully held it up for Milo to smell and Milo opened his mouth like he was going to eat it. So taking that as a sing of readiness we decided to try a little cereal. (pedi. said it could happen between 3 to 4 months) It didn't go well. He would make this horrible grimace every time I would try to put the spoon in his mouth and then act like he was swallowing, choke and end up drooling it all out. Apparently he was not ready at all. So we gave it to him in a bottle and that went much better. I have discovered though that he doesn't really like the taste of formula. He much prefers breast milk. It's work to get him to take all of a bottle of formula but if we give him stored milk he'll suck it right down.

Since Milo has been exclusively breast fed since he was born I always thought that changing poopy diapers was gross but not really that bad. After all of our feeding experiments I discover how wrong I was. That was AWFUL. I mean REALLY AWFUL. Chris was laughing his butt off while I was in there yelling "OH MY GOD, You are SO going back to just breast milk!" What made it worse was that he wasn't quite done filling his diaper when I decided to change it and let's just say that if that had been a runny breast milk diaper I so would have had a face full of it. GROSS, GROSS, GROSS!!!

Milo NOT getting spoon fed 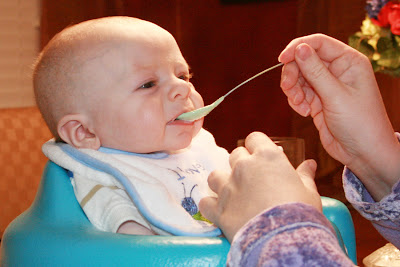 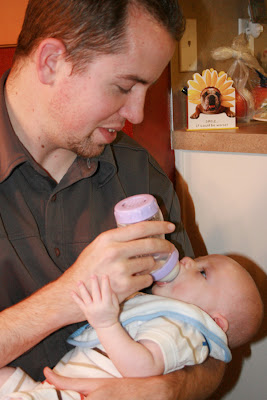 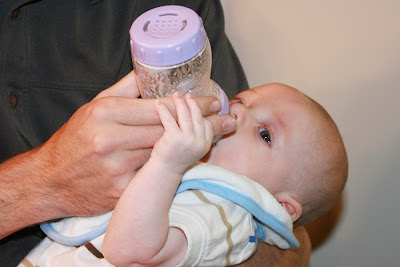