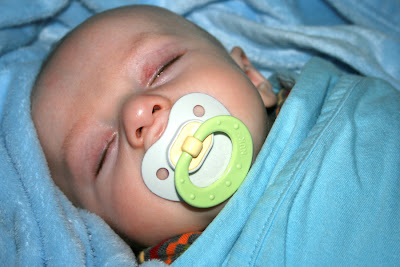 The night before last Milo had another really bad night of trying to sleep in his crib and I was so frustrated I ended up letting him cry it out. After a lot of screaming he did manage to calm himself down and and fall back to sleep. I was so exhausted that I persuaded Chris to take the night shift last night and wouldn't you know he didn't scream at all! He woke up at 3:30 for his night feeding and than went right back to sleep and woke up again at 7:45 for the morning. YAY! I hope this means he is finally starting to get used to his crib. I have only tried a couple of naps in the crib and they only went OK. He didn't take nearly as long of a nap as he should have so he ended up taking the last half of his nap in the swing. But that's OK, a little nap in the crib is still progress. Also when Chris got him up this morning he had gotten one of his arms out of his miracle blanket. I have no idea how he could have done that, that thing is like a baby straight jacket.
Posted by Abby at 10:14 AM

Abs, you kill me! Collin has a miracle blanket too and I also call it the "straight jacket!" Man, the things we do to our babes! So cute! Good luck with the crib, I hope that continues to go well. Has Milo always slept in his swing even during the night? Collin sometimes likes his swing and sometimes hates it. He is a hard one to figure out but I do know if he doesn't get a good quality nap, he is a little devil to deal with!