As Milo's physical development goes along he keeps coming up with new and interesting ways to turn that development into play. He never fails to surprise me with the things he does next. Today He decided that the world looked cool upside down so he kept putting his head on the floor and hiking his little butt up in the air. It was hilarious! He has also started doing this side crawl thing for no other reason than he discovered that he can and thinks that's cool. I have so enjoyed watching him develop into a toddler. It's has been the linear development that I thought it would be but that has only made it more fun to watch. 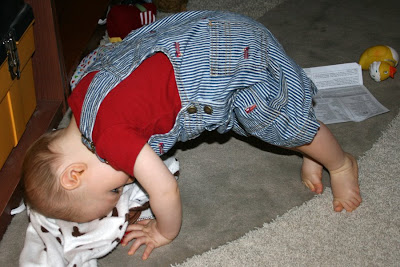 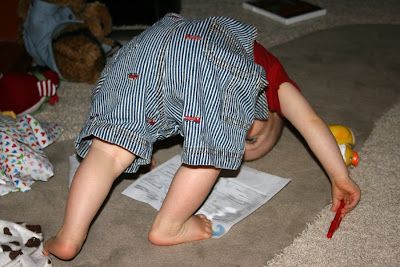 I love this child.

Hannah does that all the time and will look between her legs and say boo. It's hilarious! I love seeing your pics of milo. If you ever take a bath pic of him like the one i took of hunter i will try to edit it for you to have the same look since u liked it. I actually had that printed and framed and it looks awesome.